For those looking to find snow-capped mountains, historic cities, and gorgeous waterways, Austria river cruises are the place to go. The country has a distinct Germanic heritage that plays into everything else. Because of that, vibrant cities with memorable locations and delicious food are commonplace.
​
Most river cruises in Austria follow the Danube River. Originally popularized as a trade route through several European countries, the Danube is now one of the most beautiful waterways in the world. The Danube River weaves through the Austrian Alps with grassy banks and a distinct tranquility. While winding through Austria, the river takes cruises through cities and country alike.

Austrian History Along the Way 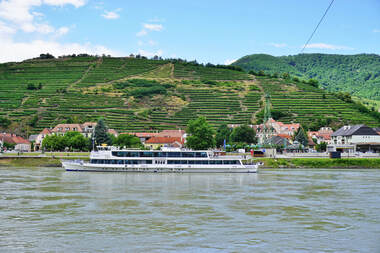 Wachau Valley - Austria
Cruises through the country will stop in Vienna and Salzburg, two of the most popular cities in Europe. Austria's cities have a history with music. Many of history's greatest composers, like Wolfgang Amadeus Mozart, Joseph Haydn, and Anton Bruckner. When you visit any of these cities, you'll still be able to find tributes to their musical genius. For instance, a popular attraction in Salzburg is the Mozart Birthplace Museum. Historians in the city have worked since the 1700s to maintain the building and many other artifacts from the composer's life.
You'll be able to find countless more museums and historical artifacts throughout Vienna and Salzburg. In Vienna, the Schönbrunn Palace is a massive landmark that many visitors make a point to see. At the palace, you're able to explore the outdoor gardens and take tours of the sprawling building -- a fine example of Baroque architecture. In Salzburg, the Hohensalzburg Fortress is a massive structure built in the 2nd century. It looks over the city from a hill above, so you can't miss it. Though the most popular architecture style in Austria is the older Baroque, the cities you visit will have a unique blend of old and new styles. They're fully modern cities after all, with plenty of creature comforts -- dining, shopping, and nightlife.

Though there's plenty to do on the ship, food and drink and entertainment, you'll be remiss if you don't explore the cities where ships port at. Transportation is convenient and modernized in Salzburg and Vienna, so travelling around the cities is never difficult. Cruises also assist you in connecting with travel guides to show you around. The most common types of tours offered by guides are either on foot or bicycle.
Once you're out and exploring the Austrian cities you'll come to port in, you'll find there's no shortage of things to do. Along your trip, you can even book a lesson to learn Vienna's very own style of dance -- the Viennese Waltz. Both cities revolve around music, so you'll find it in every facet, especially the nightlife.
Aside from the music in Austria, you'll find that Michelin-starred restaurants are a dime a dozen. Locations like Gosau Lake offer a picturesque backdrop where you can hike or go out in a kayak or boat. In fact, hiking is a very popular thing to do in Austria. There's the Austrian Alps, which offer countless trails, Karwendel Nature Park, and more that offer great trails.

Seeing Austria from the Danube

No matter where you're at in Austria, the Danube River functions as home base with a river cruise. It runs right through the middle of most cities, making it the perfect place to return to no matter what you're getting into. We recommend always making sure you know the way back to the boat, though it's usually very easy to find Austria's ports. When you're ready to book the most serene trip you've ever been on, look no further than our Danube River cruise options. They'll leave you with a lifetime of memories that you're sure to never forget. ​