A visit to the capital of Austria is one of the best European cities you can visit. The only way a trip to Vienna could possibly get better is with a cruise along the Danube. Vienna itself is a wonderful city full of history. It has a great blend of famed older districts and modern attractions.
Just behind Berlin, Vienna is the world’s second largest German-speaking city. It’s also the largest city in Austria, with a massive and diverse population. Many tourists flock to Vienna each year to explore its sights, eat in its cafes, and learn about its culture. Vienna is a very popular destination for tourists, with millions stopping in every year to see what the city is about.

A Capital for Classical Music

The city has been the home to many famous composers. Beethoven, Mozart, and Strauss have all lived in or made music in the city, so it’s musical heritage runs deep. Vienna is even known as the capital of classical music. To do this day, it’s still a very popular destination for virtuosos and fans alike.
​
Locations like the Wiener Musikverein and the Schonbrunn Palace are beautiful locales where you’ll be able to catch a world-class concert. The city still attracts several modern composers and musicians. Everyone from Hans Zimmer, the well-known cinematic composer, to the Vienna Philharmonic Orchestra has played an amazing set in the city.

When cruising along the Danube, you’re not too far from some of the world’s greatest classical music concert venues. A concert in the Golden Hall is less than a mile away. The venue still hosts tribute concerts that recreate the music of Mozart and Strauss. You can catch these regularly, perfect for an evening out on the town.

The Vienna State Opera is another fantastic location to catch music in Austria’s capital city. First built in the 1800s, the magnificent building was partially destroyed by a bomb in World War II. It was rebuilt after, and continues to house both the opera and Vienna State Ballet. Catching the opera is great, but if you’re short on time you can also take a daily tour of the building. Tours last just 40 minutes and are fairly cheap -- perfect for a quick stop on your expedition around the city.

A City Brimming with Museums 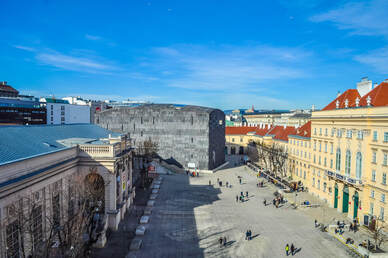 Vienna MuseumsQuartier
If you’re not in the mood for music, there’s plenty more to do in Austria’s biggest city. Cruises along the Danube also get you up close to a ton of history. From gorgeous buildings to ancient artifacts to modern art, Vienna has it all.
​
One of the best places to visit for museums in Vienna is the MuseumsQuartier. Only a little over a mile from the Danube river, this quarter is filled with museums. It offers more too, with theatres and artist studios located on the premises. Some of our favorite parts of MuseumsQuartier are: These 4 museums could take up your entire time in the city, but the MuseumsQuartier has even more to offer. You can find great dining and shows as well, perfect for taking a load off after looking at exhibits all day.

Aside from MuseumsQuartier, Vienna has even more outstanding attractions. Once again proving to be the music and museum city that it is, Mozarthaus is the old residence of Mozart, turned into a museum of his works and life. There are even more unique finds just like this throughout all of Vienna, perfect for a stop while traveling about.
​
Another great place to visit -- where you could easily pass a whole day -- the Hofburg Palace has plenty to do to fill an entire day. While the name conveys an old royal residence, the palace also has cafes, stores, and attractions. It’s essentially an entire square in itself, perfect for getting a taste of Austria all in one place. Much like the rest of Vienna, Hofburg Palace features excellent food and beautiful architecture.

Being Austria’s capital and largest city, Vienna is full of great food. There are plenty of local restaurants and eateries to be found on nearly every street corner. If you’re trying to find authentic cuisine in the city, the easiest to find is usually in cafes. Some of the best Austrian-specific food is schnitzel, tafelspitz, or sachertorte. All are native dishes perfect for a quick meal.

Another wonderful hallmark of Vienna is its speediness to get around the entire city. While you’re certainly able to walk or bicycle through, the city has a focus on urban design that has certainly paid off. Public transport stretches across Vienna, so you’ll have access to a new subway system, trains, and buses.

Because of this, Vienna is also a friendlier city to those with wheelchairs and walkers. It’s more accessible than some other cities in Europe, which makes it perfect for older and handicapped visitors.
​
Vienna is an amazing city to visit, with beautiful art and architecture. It’s well-designed layout and welcoming culture make it one of the easiest locations in Europe to travel around. The city is an ideal spot to stop when cruising the Danube. If Vienna sounds like your cup of tea (or bite of schnitzel), contact us to start planning a Vienna cruise experience you’ll never forget.