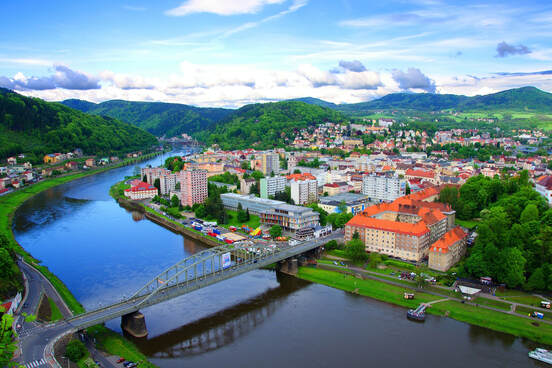 Labem, Czech Republic on the Elbe River
Voyages on the Elbe River are one of the greatest ways to see Germany and the Czech Republic. The river begins in the Czech mountains, and then flows down and through Germany. It finally reaches its end once it runs into the North Sea. Along its route, voyagers enjoy tranquil agriculture and forested landscapes on either side. It runs through beautiful valleys with towering, tree-lined hills on both sides and into major cities, where travelers can explore to their heart's content.

Rivers connecting with the Elbe River

​A great feature of the Elbe River is its connection to other rivers on the continent. This makes it an ideal place for European river cruises, since it can take its travelers to a variety of destinations. The network of rivers running throughout Europe connects voyagers with major cities, wine regions, and more. The Elbe connects to rivers like the Spree River and the Vltava River, both of which offer fantastic opportunities for travelers to explore Europe. Because of its connections, the Elbe is often a part of German river cruises and Czech river voyages alike.

Like the Elbe, the Spree River also runs through Germany. It’s most well-known for winding through Berlin, the Germany capital. Along its fairly short route, the Spree also travels through a number of smaller German towns and villages.

The Vltava River cuts through the center of Prague, the capital of the Czech Republic. The Vltava is a scenic river lined with historic sights. Once in Prague, architectural masterpieces are a dime a dozen along the river’s banks.
​
Each of these smaller rivers connects to the Elbe, making this well-connected river an even better way to see Europe. Though its additional waterways are important to Elbe River cruises, the Elbe hold its own too.

The Elbe is a little over 1,100 kilometers, or around 690 miles. It’s certainly not as long as the Danube, comparatively, which is 2,850 kilometers in length. Despite this, the Elbe makes up for it with several locations along its length through Germany and the Czech Republic. The Elbe is an important river to many German cities. Here, we’ve listed some of the most popular destinations for cruisers on the Elbe River.


Though these are some of the Elbe’s most popular destinations, there are plenty of other German and Czech spots lining its path through Europe.

The best way to experience the Elbe River

​River voyages are undoubtedly the best way to experience the Elbe River’s many sights. Cruisers will have access to luxurious cruise vessels that often feature restaurants, lounges, and sun decks on board. Spending time on a sun deck while watching the Elbe’s scenery pass by is a memorable experience that travelers will never forget.
​
The weather in Germany is often temperate, but it’s always best to bring a jacket and umbrella just in case. If you’re visiting in the winter, be sure to pack warm clothes. Regardless of the weather, river cruise ships are always comfortable places to sit back, relax, and enjoy the sights. For cruisers interested in German and Czech culture, arts, and lots of great architecture, Elbe River cruises are the way to go.