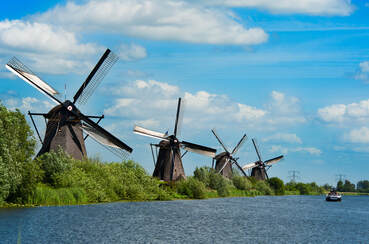 Windmills in Kinderjick
River cruises through the Netherlands offer travelers a chance to see beautiful countryside, historic landmarks, and bustling metropolitan cities. A well-rounded experience, these trips are some of the most popular European river cruises. Dutch river voyages typically follow the Rhine, one of the continent’s largest and most populated waterways. Along these cruises on the Rhine River, travelers will get to see a number of amazing sights and delve into the Dutch way of life.
​
Visitors to Holland, a region of the Netherlands, will get to see how exciting the country is. Holland and the Netherlands are often used interchangeably nowadays. Travelers will get to explore great places like Amsterdam, with its bustling cityscape and great food, and The Hague, a city with major connections to the United Nations. Smaller villages dot Holland’s rivers, where cruise excursions let visitors stretch their legs and check out rich history. One common theme throughout all of the Netherland’s river cruises is beauty -- whether that’s in nature or urban life.

Culture runs deep through the Netherlands. The Dutch culture has developed its own cuisines, architecture, art, and music. Travelling around the country, visitors will see and be able to try all of these things.

Voyagers will have the option to dine in one of one hundred Michelin-starred restaurants, spread across the entire country. Much like nearby Germany and Belgium, great food can be found around every corner, and there are some must-try Dutch staples. Stroopwafels are a must for foodies visiting the Netherlands. They’re a small sandwich made of two thin waffles with a filling in the middle. For the less faint of heart, Dutch New Herring is a raw herring served with onions and pickled cucumbers. Regardless of your dining preferences, the Netherlands has something for you.
​
For history buffs, there’s plenty to see. The Netherlands were a location for many happenings during World War II, and tributes exist to this day in honor of them. Dutch history is also prevalent in the country, which travelers can explore and learn about through tours and guides. In fact, just walking around the country’s cities, visitors will get to experience Holland’s history. Near-ancient town squares are common, with buildings that are spectacularly still intact.

Cities in the Netherlands

​There are plenty of great little villages spread throughout the Netherlands. While there’s a high number of potential stops, two cities tend to take precedence on these river cruises. Those two places are the Netherland’s capital, Amsterdam, and The Hague.

Popular things to do in Amsterdam, Netherlands

Popular things to do in The Hague, Netherlands 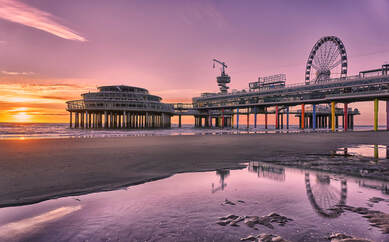 Scheveningen Pier, The Hague
The Hague is known for being a center for government, including national and international affairs. This city is home to the United Nations’ criminal court. The Hague isn’t all business though -- it’s a great city where the rich Dutch culture runs deep. Travelers will find historic buildings, neat museums, and great food in the Hague as well. Here are some of our favorite places in The Hague:
​

Preparing for a Dutch river cruise

No matter where you’re visiting in Holland, you’ll find unique places just like the ones we’ve mentioned before. It’s a historic country with tons of great, modern parts as well. When you’re cruising the Dutch Rhine River, we recommend trying to visit as many places as possible.

The country has a perfect climate for voyagers too. It’s weather is usually very temperate, with moderate summers and winters. When visiting the Netherlands, it’s best to be prepared for some rain with a jacket or umbrella.
​
Overall, Holland’s residents are very welcoming and helpful to travelers. Dutch river cruise visitors have the unique opportunity to explore the best that the Netherlands has to offer, all from the comfort of world-class, luxury cruise ships. It’s a can’t miss experience that we can’t recommend more.