​Taking a voyage through one of Germany’s scenic rivers is always worth it. These river cruises take travelers to many of the best spots that the country has to offer. Germany’s rivers all offer a distinct experience that guests will remember for a lifetime. Visitors will have the chance to immerse themselves in Bavarian culture, explore Germany’s bustling metropolises, and sightsee with the beautiful nature lining the country’s waterways.

Voyages on Germany's most popular rivers 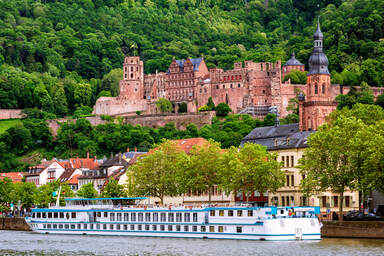 Heidelberg, Germany
River voyages in Germany will often travel the country’s major waterways. Travelers most often choose between cruises on the Danube, Rhine, or Main rivers. The three rivers are some of the most popular cruise routes in Europe.
​
The Danube River is the second longest river on the continent. It’s arguably the most common European river cruise route. The river offers a plethora of destinations -- cities, villages, and nature -- that travelers can plan their cruises around. Since the river is over 1,700 miles long, voyagers will get to choose between a variety of countries along the Danube River. It originates in Germany, but travels through or near Austria, Hungary, the Czech Republic, and a number of other countries along the way.

Germany’s Rhine River isn’t quite as long as the Danube, but definitely holds its own with what it offers cruisers. The majority of the river is found in Germany, but it finds its beginnings in Switzerland. The Rhine eventually spills out into near Amsterdam in the Netherlands. The area in Germany to the river’s west is known fondly as the Rhineland. It’s an agriculture-rich region with plenty of wineries -- including the Moselle River Valley, another popular river cruise route.

The Main River is actually a tributary of the Rhine, but is a great way to see more rural parts of Germany, along with a couple of great cities. The river is fast-moving, and its surrounding areas feature lots of history. Travelers will find relaxing river voyages on the Main River, along with lots of great Bavarian architecture. 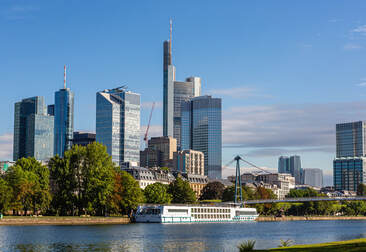 Frankfurt am Main (Frankfurt on the Main river)
River voyages in Germany travel to and come to port in several different cities. Depending on the city and region, each location is an entirely unique experience. Some cities are more historic, heavy on Bavarian tradition, while others are modern hubs for innovation and commerce. Here, we’ve listed some of our favorite cities visited by German river cruises and some of the best things to see in each of them.
​