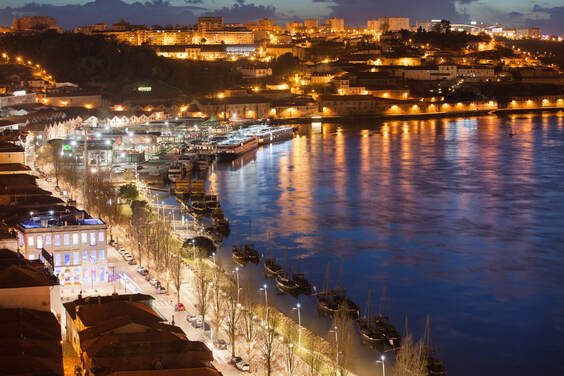 Vila Nova de Gaia on the Douro River
These Portugal river cruises are known for offering visitors the experience of a lifetime. Travelers on Douro River voyages are given the chance to see Portugal’s capital city and tour gorgeous wine country. They do this all while heading west along the Douro, exploring its multifaceted waters.

Most Douro cruises bring travelers through rural countryside, where they’ll have the chance to relax on sun-soaked ship decks with drink in hand. The river offers travelers the chance to step back from the hustle and bustle of daily life. Cruisers can enjoy the scenic Portuguese country all from the comfort of high-end cruise lines.

Cruise travelers will see how Portugal was originally built around the Douro River. Along with the wine country, visitors will see many villages dotting the river’s banks. Cruises come to port at some of these, but also in some wonderful, historic cities. Travelers of the Douro River are able to see many of Portugal’s most famous locations, ensuring a memorable trip down the river.

Portugal river voyages offer guests the chance to see a lot -- but mainly focus on traveling the countryside in style. Travelers certainly have the chance to visit exciting cities, tour wineries, and explore quaint villages. Besides that, they’ll spend a lot of time on the ship, enjoying Portugal’s great climate.

On most Douro cruise vessels, cruisers can soak in the sun during Portugal’s summer months on an outdoor sun deck. Summers in the country are warm -- but not hot -- with temperatures around 80℉, or 26℃. Even winters in Portugal are pretty mild, with average temperatures near 60℉, or 15℃. The moderate climate in Portugal makes the country an excellent place for cruises year-round.
​
Ships also commonly feature other modern amenities on board. Douro cruises will usually have lounges, restaurants, music, and more on board. Guests spend the night in world-class staterooms on the ship, so they always have a great place to return to after long days in the city.

Visiting cities on the Douro 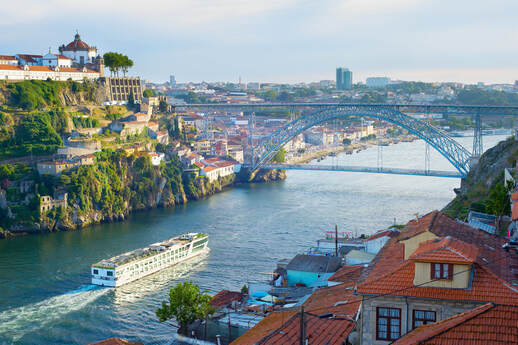 Porto, Portugal on the Douro River
As a country, Portugal was built around the Douro River. The waterway was originally a common trade route for the area’s settlers. Because of this, all sizes of populations exist along the river. Douro River cruises travel by small villages and large cities alike. All locations have historic landmarks, classic architecture styles, or intriguing cultural cuisine. Here, we’ve listed a few of our favorite cities that line the Douro River.


While not the most urban of European river voyages, the Douro River certainly has some great urban stops. Even with all of its great Portugese cities and villages, the Douro’s real charm is in its travels through nature. 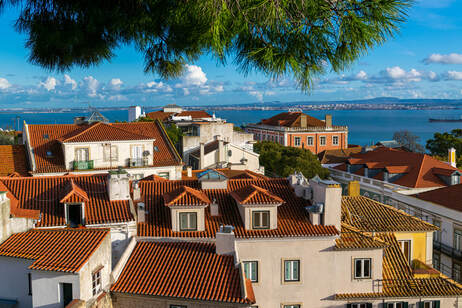 Porto, Portugal and the Douro River
Travels on the Portuguese’ Douro River give travelers the chance to see some of Europe’s best wine country. When you’re ready to explore beautiful, rural Portugal -- and see a few great cities along the way -- Douro River cruises are the voyage you want.